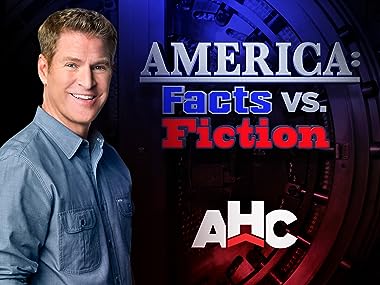 This was so much fun to be a part of — you can see me tonight in my appearance on America: Fact vs. Fiction, sharing what I know about the fateful events when Alexander Hamilton met Aaron Burr at the dueling grounds at Weehauken.  Was Hamilton, as the song says, taking “deadly aim” at his opponent, or did he “throw away his shot?”

Although it didn’t appear in the show, it’s fascinating to know that Burr was charged with murder twice for Hamilton’s death — not only in New Jersey, where the shot was fired, but also in New York, where Hamilton died.  Ultimately, though, Burr evaded justice, hiding until the trouble blew over, only to emerge and later lead a plot to carve out a part of the frontier territory at the time as a separate empire… under his rule, naturally.  Burr is not one of favorite figures from the Revolutionary Era…

As with my prior appearance, you can use the AHC Channel Finder to find your local listings. As the AHC is not carried in all cable plans, I will keep you all apprised as the streaming video edition of the show becomes available.

As many of you may have already heard, my focus on little-known stories of the Revolutionary era recently brought me a really exciting opportunity. I’ll be appearing as a featured expert commentator on an upcoming miniseries on the Discovery Network’s American Heroes Channel (formerly the Military Channel), which will premiere nationwide on the 15th and 16th of December:

The Empire Fights Back
Premieres Monday, December 15 at 10/9c
Time after time, American independence seems like a lost cause as George Washington’s Continental Army teeters on the brink of annihilation. The heroics of five little-known patriots help the colonies live to fight another day. John Glover, a tough New England mariner, saves 9,000 soldiers from certain capture on Long Island; a shadowy double agent, John Honeyman, helps Washington score a stunning victory at Trenton; a teenage girl named Sybil Ludington rides to the rescue of rebels under fire in Connecticut; a Pennsylvania sharpshooter named Timothy Murphy fires a bullet that turns the tide of the war; and an Indian warrior called Han Yerry leads a rescue mission to starving soldiers at Valley Forge.

Return of the Rebels
Premieres Tuesday, December 16 at 9/8c
The American Revolution seems doomed as the British army launches a bold new campaign in the south, but five unsung patriots help reverse the course of the war and shock the world. Nancy Hart, a Georgia mother of eight, battles a patrol of loyalists singlehanded; Elizabeth Burgin attempts a daring rescue of American POW’s in Brooklyn; a supersized soldier named Peter Francisco becomes a legend on the battlefield; a Virginia slave, James Armistead, steals key secrets leading to a stunning victory at Yorktown; and a frontier teenager called Betty Zane runs a gauntlet of death in the Revolution’s final battle.

You can use the AHC Channel Finder to find your local listings. As the AHC is not carried in all cable plans, I will keep you all apprised as the DVD edition of the show becomes available.

I’m very excited about getting to share my knowledge of the our nation’s history with a wider audience, and I’m grateful for the opportunity to explore this interest to its fullest through telling tales from a most singular revolution. I hope that you’ll watch and enjoy this terrific series, and share it with your friends and family who may be interested—and thank you in advance!